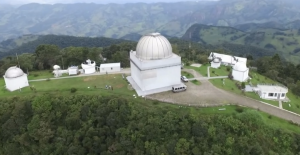 Telescopes at Pico dos Dias Observatory
The Pico dos Dias’s observatory (OPD) is in the southern Minas Gerais, Brazil, at an altitude of 1864m. The Brazilian National Laboratory of Astrophysics (LNA) operates four optical telescopes installed at the OPD. All of them are constantly being upgraded to increase their efficiency.

The 1.60-m Perkin-Elmer telescope is the main telescope of OPD, and it is the largest optical telescope in the Brazilian territory. It was commissioned in 1981. The telescope is a Ritchey-Chrètien with a focal ratio of f/10 at the Cassegrain focus and f/31 at the Coudé focus. Several modifications have been added to the motion control system based on LabView which includes an automatic pointing system and a new auto-guider. The telescope is being used for the photometry, polarimetry, direct imaging, and spectroscopy.
The 0.60-m Boller & Chivens telescope was installed at OPD in 1992 under an agreement with the University of São Paulo (USP). It has Ritchey-Chrètien optics with an f/13.5 Cassegrain focus. It has been upgraded with automatic pointing software like the 1.60m telescope and is being used for the photometry, polarimetry, and direct imaging.

The 0.60-m Zeiss Jena telescope was acquired through an agreement between the Brazilian Ministry of Education and former East Germany and was installed at OPD in 1983. It has classical f/12.5 Cassegrain optics and is being used for photometry only. This telescope does not have automated pointing.